A comprehensive review for DJD UK Global Music by artist product and content reviewer John Koudela III (USA) This review is based on 19 tracks and 1 artwork. Published January 10th, 2019. 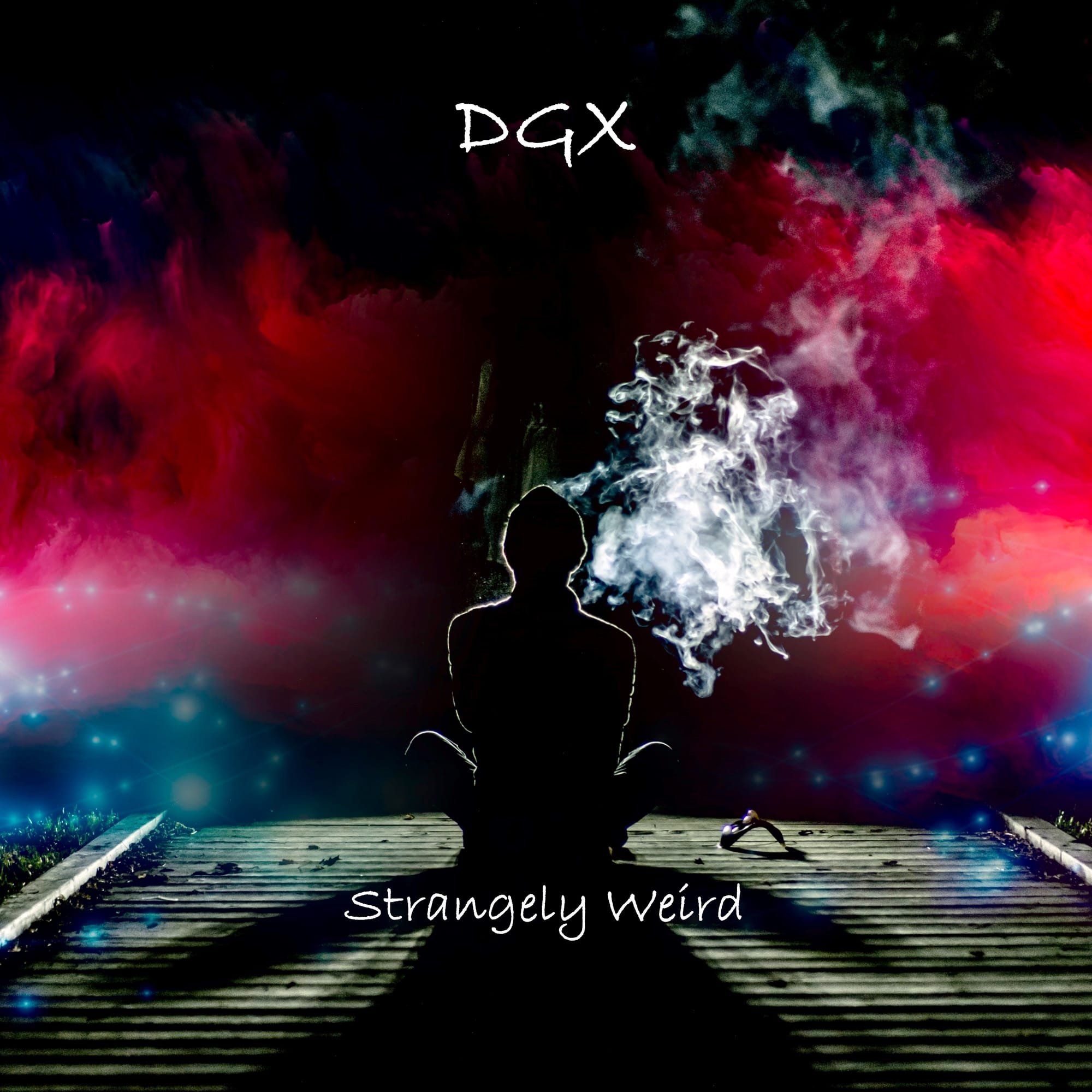 DGX. UK – ALT/INDIE/POP
DGX are a recording band with Gary Agg as the songwriter, guitarist, and lead singer, and Dawn Agg who is on keyboards, percussion, and backing vocals. Gary has been a singer/songwriter most of his life playing in various bands. He has played at The Marquee, Wardour Street in London and supported the likes of Marillion, Mud, and Alex Harvey.
To Sample and Purchase this and other DGX products online,
Click the link, also available from most other online stores.
- Spotify Channel -

Takes me back to times sitting in circles with friends, sharing what we brought, talking and laughing about our times together. There’s a blending of parts in this song to streams in my memories. And I’m thinking wasn’t there a guy who played guitar like this to bring us closer together and remind us we had nothing to worry about? I think so. This verse: “Your head and my head…and it’s alright, and it’s alright.” – this was us.

Shed
There’s a hollowing and a deep draw in this piece. Starts off slow…and the soft male vocals tends to slow me down a bit on one thought, on the surface of it, without much of a reaction. I wish the song was longer so I could open up more, but it’s ok. I hear it telling me ‘I know, I understand’….and I like that. The words are giving me a choice about how deep to go.

Skanking Up
Planning to skank at your next underground event are ya? This whacky, rhythmic, beats in your head, guitar strumming tune gives you what to expect to hear about your skanking. Ya know it’s like the old Monkees’ legs criss-crossing ”walking down the street” moves. OMG your parents did that in the ‘60s?! It’s catchy. Practice before you go. Don’t be a jerk, but don’t believe everything you hear either. Just get out there and skank!

Freaking Me
Direct from the heart about loving a partner. Sung like a ballad wanting to get closer by writing it out and reading it no matter how freaky it feels. Clear words to follow backed by crystal clear guitar harmonics playing out the need to do whatever it takes to get with the heart of another. Love the simplicity of the message.

Dirty Little Stain
A bit of bluesy revelation, down strumming guitar, simple keyboard chord jumps, lightweight background percussive follows, and guitar sliding zags. It sounds a bit like the kind of storytelling from Bonzo Dog Band. This time about how down your apparel creations are on you, how they own you, even on the lonely, covering you like stains, never showing the true you. Really? I gotta get me some new clothes.

My Love & More
Almost that melancholy feeling of loss through a mix of acoustic guitar and piano along with breathy vocals expressing a need for closeness from a loved one or one who has recently passed: ”feel you close next to me”, “can hear your heartbeat next to me”, “I will give all I am and more”, and the mention of angels nearby. Guitar, piano and vocals come out clear and blend well without distraction to the listener who needs to feel their own memory of a loved one.

Nothing No More
Ah, a listicle song: a single key repeating like numbers on a list and guitar/keyboards mix on each as the item for that number – an inventive music structure. This is a song about a breakup: ”all about you”, “she don’t wanna be my baby”, “tell me it’s easier”, and ”if nothing no more”. The lyrics follow a train of thought and of hope like: ‘one last try to communicate because I don’t want to make the final decision’, ‘will it be easier if we don’t do anything else any more’, and ‘am I on the same path as you are’. Breakups are hard: we are not alone with these thoughts in our heads.

Lucy Half Rolling
An uplifting and hoping kind of song. I thought, for a moment, I was listening to Pink Floyd doing a Beatles song. It’s that good. And then here is this ‘yeah, right’ ROFL gal in the background that’s quickly overtaken by thoughts of realizing “wasting my time in a world without you”, “don’t make me blue by leaving me”, and that hope of not losing out: “river of hope waiting for me when I get old”. And suddenly, I’m in a living room with friends talking about this promising relationship I’m in and this guy gets out his guitar and starts singing this song. Yeah, I’m not going to tell you the outcome.

Make You Mine
Single, straight out there, easy, slow guitar strumming start with upfront out-of-the-heart lyrics about when ‘everybody tells you to be with this gal without telling you why’. We all have those moments when others are in line with our thoughts: ”make you mine”, “she wants to spend her time with me”, and “I’m a lucky man”. Really hits home! Like the reverb, small room cabinet effect, and the vibrating vocals as if to hear “place there in my heart”. Well mastered song expressing found joy!

Funk Me Up
Whether getting a “spirit in your mind” or learning you were ‘joked about while you slept’…you’ve just been “funked up” and you’re gonna get more of it. Yes, this starts with smooth overdrive and flanging guitar work with chord triads like from a ‘60’s summer rock sound with a sudden slice half way through with light ‘70’s funk styles before fading out. Now that’s some tricky mastering to get that switch played in just right to funk up your groove and still catch your smile!

Waterfalls
Yes, this is a love song, a ‘from-the-heart’ country lullaby of “you keep me holding on”, “you’re the best”, and “you’re always there on my mind”. It’s short enough to charm you with remembered words of love and long enough to keep your heart a flutter like it did the last time.

Blackrose Jake
Lead vocals sound like “What Do You Want From Life” by the Tubes and those from“The Wall” LP by Pink Floyd. And just behind the ‘70’s rock influenced melodic chord piano overlays, supportive guitars, keyboards and drums are vocal drop-ins: a quick glimpse of a marbled mouth singer becoming clearer, a radio announcer heard in bits like across a field of soldiers fighting, and guy with a comedic British accent… and I’m thinking am I listening to a comedy channel out of Canada?!’ But given this lyric verse: “some kind of love that won’t hurt you anymore” it’s sweeter it’s about the kind of love like a man would have for a harem woman who wants to attempt escape with him to England like in the 1950’s film “The Black Rose” or what an owner feels from their race dog who has the same name of a dog in UK dog racing.

Strangely Weird
Clean tones guitar melody, horn sounding, later distorted strumming, and short length wobbling zig zagging riffs during vocals and back to clean guitar work ending on the second note to last as if the song hit a wall before the last note could be played. Definitely ‘strangely weird’ throughout. At first, I get with it, sounds ’80’s, a bit spacey, and then I’m back to the choir part that I can’t get out of my head. I’m captured in less than two minutes!!

Anytime
Perhaps weirder than “Strangely Weird” is this song reinventing the range of processing of thoughts: a car driving through the rain and air being squished out of a rubber bladder after being dropped hard on a wet mud puddle to create the ultra-low notes mixed below the mid-range keyboard melody and vocals thereafter. The vocals sung within the range strongly suggests “give you all I got” was closer to the depth of love than just saying “I will give you” at “anytime”.

Unusual Friends
A lullaby about the hopeful future of building an “unusual” friendship with its own human expressions less predictable than those in the world of confusing information. Barely heard behind the melody is the lead guitar softly strumming lullaby chords, the light drums, and lyrics expressing needs to reach it: “a face that’ll show what I am thinking”, a suggestion implied that a smile will be different than a conditioned response, and “my eyes look at you because they’re talked to”. Reminds me a bit of the soothing Blackbird verses by the Beatles without the guitar slides introducing the next verse. I especially liked the mention of getting through the world together to be “unusual friends”. Touches you right there in your heart.

Sublime A-Hole
I’m thinking of a Friday night in college with friends and we just found this great song to sing in harmony: one does the ‘a-ho’s, another the “you’ve got to let it go”, and another does the “oh oh oh” part. It’s a ‘we got this’ sing-a-long about what’s in our heads that ‘gets us red’, those “perfect little pictures” we have, and the “tiny little thing I said, was going down inside of your head”. And one of us giggles and an ‘oh oh oh’ reveals someone has a secret and we all sing out ‘tell, tell, tell’! And another says ‘Let’s do it again’, ‘you start’, ‘I wanna do the ‘a-ho’s’. And we laugh and do it again!

Judges Houses
Perhaps it is an absurd proposal from the hint of Hungarian gypsy music in this piece that says it can be about hardship and exploitation. After all, without disgust felt after listening to “the crap” and wrongful statements from judges who live in their “big fat houses” acquired through such exploitation none of us would been able to participate in the ending labored muddy march of abomination. But at least we can cut a smile during it about the silver spoon that disappeared where the sun doesn’t shine! Well done DGX!

Google Girl
Thick guitar string pickings – yeah, that’s how this laptop wifi relationship went with this “Google Girl”….talking, talking, talking….constantly. It was so frustrating: “don’t fuck me up, you’re my one sensation”! And then the guitar slides in between and the chord changes for the up times of “make me laugh through some random fun” and for the pitfalls like in any relationship. And then someone gets caught, denies it, and OMG it’s too late. Yeah, I’m not gonna tell ya the end. Love how the music was crafted for the story!

Fuck You
As with other DGX songs instruments played cause an emergence of feelings in the listener matched with what is expressed in the focus of the lyrics. In “Fuck You” minor guitar chords are used to express the “wretchedness”, frustration (“busting all my energy”) and tiredness (“killing me”) one is faced with when trying to figure out what the other half of their relationship wants. Equally, hopeful lyrics are played with upbeat keyboard and guitar styles for lyrics like this verse “if only you could let it go, instead of picking….”. I could feel this person’s dilemma. Well done.

Artwork Review for Strangely Weird Album
The artwork for “Strangely Weird” fits well: sitting at the edge of the final step of life – the transcendent state of being – after having climbed through the good and bad times of life. Finally, the end of the path has been reached and the dream of knowing what is true and beautiful can be felt without question. The lights coming through the mist have come to welcome the arrival. But first, the person sitting there, wants to just remember those past times as sung in this album at least for a moment before leaving them in the past.