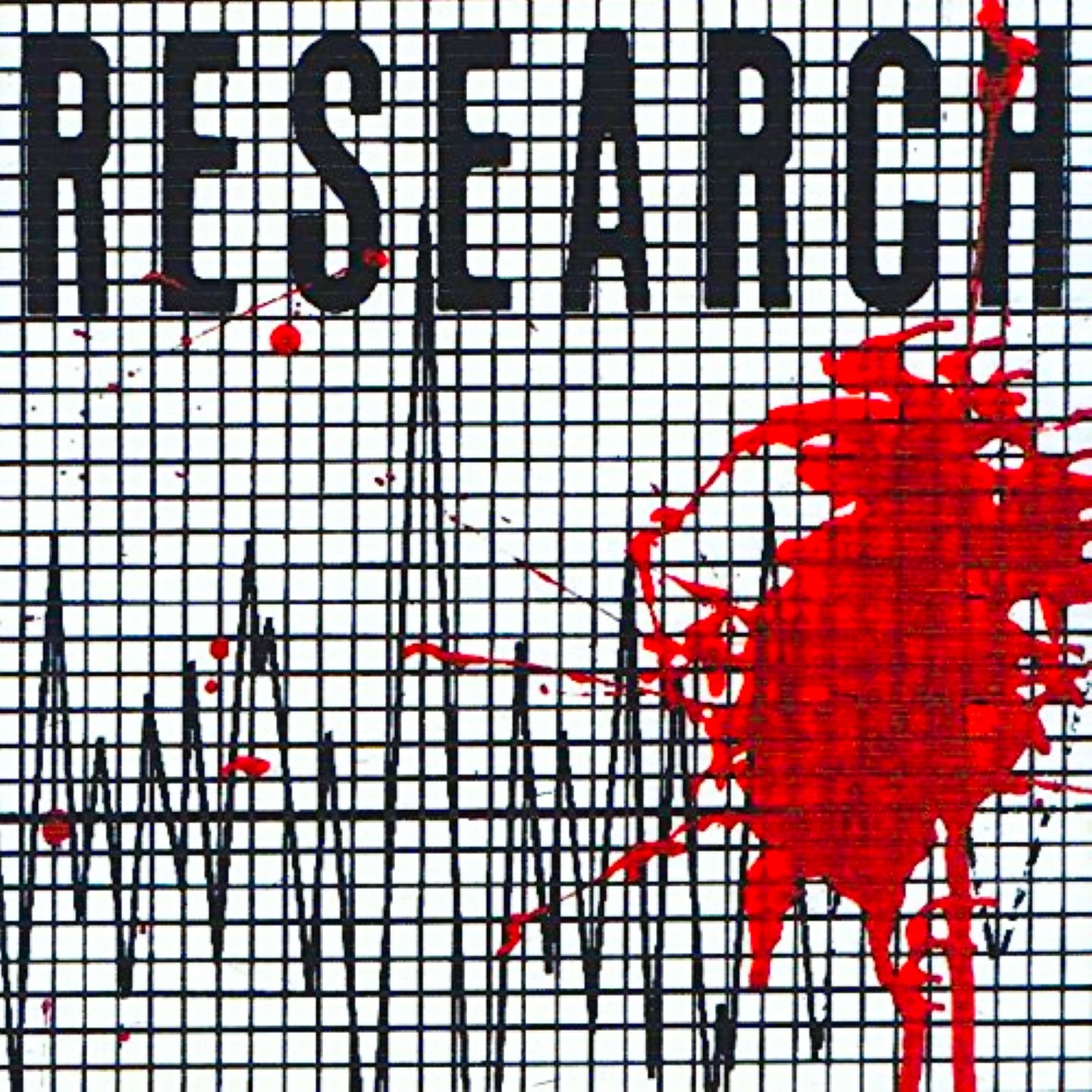 Research started in late 79 in Odessa Texas from a little group of old friends, mostly artists. We were all inspired to add our own flavor to the DIY punk scene of the time. Research went thru a few minor personnel changes during their early period, but ended up with core members, Bert, Bill, Sean, & Dave for the large majority of the bands lifetime. The music went from quirky, to pop, to old school punk, to avant-garde.

This is crazy fast music of rapidly flipping thoughts. It’s fast hand-fingering fanning on the guitar strings with a do-do-do-do do-do do-do motor drive with high pitched string slides weaving through it, cymbal tapping and hard drum pounding through the vivid lucid lyrics.

There’s that long eyes-rolled ‘ow’ growl sound on “wrong” from the line "And try to think of what's gone wrong" as if the leash on a cat was suddenly pulled tight or the hair of a guy pulled harder while twisting glass.

These lyrics about a wretched relationship stuck in a weekly routine of one day “My girl loves me on Tuesdays” to another day of “My girl yells at me on Fridays”' into the weekend of confusion brings up the frantic images of The Ramones band sitting unphased at a table in a hall of costumed crazies as seen in their music video "I Wanna Be Sedated". I’m betting that dressed up spiked orange haired head shaking wide-eyed Sex Pistols’ patient is in there somewhere!

Anyway....definitely worth listening to the lyrics twice to remind you of one of your relationships. Oh wait...they are sung twice!! I’ve been trapped there way too many times!

So Devo “Whip It” like music and vocals. There are repetitive blocks of melody, twisted sheet metal flapping tones, supportive drums in the background, a few odd cog ratchet spinning sounds and parts where guitarists playing must be running around and going up and down spiral staircases.

Yes, this is the music you’ll hear at the local mountain top space telescope stargazers hangout working another night on “What’s it all about?”. Or maybe it’s the theme song for a cult film “Black Hole Crunchies”. After all, black holes do twist space and time and eat up stars like the one that was shredded and sucked up from the centre of two colliding galaxies at Arp299.

Astronomers and moviegoers alike will be singing “How big the hole, How long the twist, What's it all about, Black hole twist”. Once you start “You can’t resist”!

Filled with twisted up and down bright minor guitar chords similar to minor 7th flat five chords from one root note to another.  The lead male storyteller, rather than singing, speaks poetically as if at an experimental jazz modern punk open mic telling a story about spelunking… “the way is down”, “inside the dark”, and about “the stalagmite, starts a cave-in, blows out the light”. The caver’s mind loses sense of day and night as the climb down plays on the mind… “down goes the train, It’s searching for, Inside the mind, Into the brain”. The question becomes if one is spelunking the cave or their mind … “spelunking minds, spelunking men, It’s too hard to find… ”. The discourse, changing paths, ends in echoing crying out a struggle to hold on to sanity “my mind, my mind”.

There are light supportive drums of cymbal tapping, light on hi hats, on snare, on the kick. A wee bit of middle eastern, hippie festive, meditative and Greek tones bounce around the mind. Is blindness settling in or has the dark come to threaten the path ahead? How much further into lost in transition? Forget the common dangers of caving. Focus rather on “surviving thru, the years of time, even mankind” to keep your head on the features of the cave and on the safety of your team.

Ok, so you didn’t make it with the cafe insurance emporium policy salesman … “He got no luck with trash like me”. But hey, you can still sulk from your bench at the edge of the park across from the cafe and observe him selling his policies to other folks while mumbling to yourself “Keeps the wealth, he got the baby on his knee”.  Yes, you could have done without his “slurping noodles sucking air” like the guys do in Japan breaking air through their mouths and forcing it out of their nose to spread the flavor. And you can wonder how many others were pressured like you were to “give me your life, give me your wife, on the dotted line”.  Well… at least the cappuccino was good.

There’s a bit of Rastfaria jazz like that of Alex Mandis mixed with traditional rasta guitar, drums and twisted minor and major chords like that of Alpha Blondie. The different volumes of rapid riff-like parts are used to emphasise certain parts of the story “give me your money, give me your wife” toward a signed contract. And while it sounds like happy music one might be careful not to buy into the line “I’ll jeopardise your leopard”. There might be space on the bench for you if you are still bummed about it.

Starts out with a bit of a bass guitar samba-like march beat ‘one….. one da-da, one….. one da-da’ till the singing takes off describing a guy who has left reality and wishes only to live behind the scenes… like all of them, in fact. The vocals are two-dimensional as if each word is trapped, like the victim, flat on one piece of paper per word. I’m thinking team of people out there looking for this guy because he’s in trouble, totally disconnected from the world who has taken the easy way out. Light percussion plays with some hi-hatting away. Sounds like jazz fusion, sings like open mic small cafe, band trapped in the tight corner, two guitars one bass and one melody on the edge of fate waiting for the bang “He carries an A-bomb inside him”. But no… instead it’s time to just “File under M, missing persons”.

Did you hear? Elvis has written his afterlife bio and inspired Research to sing it as a testament to his glory days of shake, wrinkle and throw out his arm. He’s famous now “the biggest thing to buy, all I had to do was die...”! The songs starts up with a hint of the Blues Brothers version of the Peter Gunn theme song. The storytelling is punk head shaking while minor chord strums twisted and stretched to destroy the Gunn intro and later jamming guitars with basic drumming fill the intermissions between verse sets.

Just like he left us in a mystery about his death Research’s “Elvis Was” will keep you guessing what it’s “Hocka Heema Hooma” chorus line is about. Maybe it’s the dead nuns heavenly mission statement for his ghastly t-shirt line “Ya, get T-shirts”! Everyone around you will be telling you they remember that one!

The last words of how he may have died are sung through wiggly lips while shaking a leg and clowning around: “might have been preludes”, “been Quaalude”, “been amphetamines”, “been codeine”. With that mix he’s still “all shook up”!

Ok, everyone now: “Hocka Heema Hooma”! Yea, sing it while swinging around the Hula Hoop!

If you love the fast music of the Misfits, thought the guitar guy in “Mad Max: Fury Road” should have been played by the lead singer of Chaos UK, or have been stockpiling food in your basement since getting your official Brexit Doomsday Prepper Card it’s probably because you’ve been listening to loud replays of “No Real Tomatoes” by Research while watching old movies inside your parent’s secret “painted grey” fallout shelter underneath the weedy backyard! Say that line as fast as you can!

You can hear the rain, the burning, the bomb explosions, scurrying beeps, random high pitched sounds, evasive bizarre noises, ringing bells and gas hissing through the cracks in the lifeless depth of the greyness all around. The “peace & love”, “art class”, and “friendship” and “any of that shit” are going to get replaced with “Molest”, “homes aflame”, and “blood on your own front lawn”. Forget the tomato garden! After the suggestions of jazz are gone, the cello string vibrations, thud pounding shallow kick drumming and more rain the melody will get plucked out like your life, sudden jamming and after the angry vocals the last sound you’ll hear: the toilet flush!

‘Hey mom, where are the tomato seeds?’

Looking for a climate change death march, an alternative Happy Birthday song to sing to a friend, a deathbed requiem, a last day on the job gift for your boss, some prose for a card to give your physics teacher after getting an F on your final, a single to send to your doctor who clearly has lost their bedside manners before you went into surgery, or the last letter with sound clip to the ex-… look no further THIS song is exactly what you wanted to get across!

Here’s a hint: “You were a beautiful creature once, Radiant beauty & youth, But now your skeleton is showing thru, Entropy starts to set in”. Oh yes there’s more areas failing in this relentless, slowly sung deep male vocals of this unforgiving melody expressed by cello, violin and subtle knocking till the gong is struck as the final blow!

‘Hello, hello? Are you still there?’

Human relationships, medical and scientific research are often wretched pursuits filled with positive discovery, frustration and confusion some crazier than others. We can hope our graphical tools will produce useful insights of what lies in the depths of the endless black holes we explore that eat away at the points we find along our paths.  Like the open mic poet we seek to understand their words no matter how shrewd the artist, how hidden, and disconnected they are from our expectations. That while we move above and below the norm, often too close to devastating destruction of our own shelter reinforced and protected by our chosen community and culture, we hope the stains found in our work will be enough to deter future generations from plowing into a grim reality while still making them laugh.